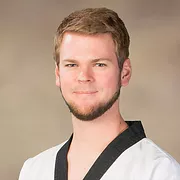 Master O started taking Tae Kwon Do with Grand Master Singh at Sangrock in the fall of 2001 & earned his first degree black belt in October, 2006.

While continuing to train for his second degree he began teaching classes. When he first came to do Tae Kwon-Do he was very shy and had little confidence, but the guidance of Grand Master Singh and the art of Tae Kwon-Do helped him achieve a greater sense of self and focus, leading to greater confidence overall.
Master O has such love and pride in teaching the principals Tae Kwon-Do. These principals go well beyond the sport. As students learn the important; because he thinks it teaches the students to make good choices and set priorities for themselves. He did the same he was in Boy Scouts and is an Eagle Scout, as well as was in the Navy JROTC at Providence High School. He has also participated in the International Exchange Program with South Korean Tae Kwon-Do College Hanzhong University for two months.

The discipline provided by the art of Tae Kwon-Do assisted him in reaching Eagle Scout, JROTC, and eventually studying Tae Kwon-Do in Korea.

Accomplishments Inside of Tae Kwon-Do

Outside of Tae Kwon-Do

Head Instructor for women/kids self defense. Master Lynn Gorski was born in San Francisco in 1947; she graduated from high school in 1965 in Okinawa. She attended college, got married, and had two children in Virginia.

She started Taekwondo with her 5 year old son in 1978 in Herndon, Virginia learning from Grand Master H. K. Lee. Her son and she earned their Black Belts in 1984 she retired to Charlotte in January 2003. In February 2006, while visiting a new dentist next door to Sangrock, She found herself drawn into the school.  Later Meeting Master O.  Though she hadn’t practiced Taekwondo for 20 years, Grand Master Singh welcomed her into the Sangrock family where she later earned her second, third, and forth degree master black belt. She earned a certification in 2010 to teach Women’s Physical Defense, which she teach at Sangrock and now Master O’s Black Belt World..

Our courses are taught by Lynn Gorski, who is certified to teach the RAD System of Women’s Self- Defense and radKIDS Safety and Self-Defense System throughout the United States and Canada. She holds a 4th Degree Black Belt from Black Belt World in Charlotte, NC. Call us or contact Lynn (SelfDefense@sprynet.com) for the current schedule and the registration forms.